Three major themes relating to implementing risk stratification into the NHS-BSP are presented. Quotations are provided to illustrate each theme and sub-theme, and are identified by their professional role.

Participants described how they currently experience system constraints including; a lack of resources, workforce, and time to provide an effective service, making implementing risk stratification into the current NHS-BSP potentially problematic.

Radiographers raised concerns regarding their capacity to answer questions about risk assessment at screening when appointments are time limited (reportedly 7 min). Participants identified that radiographers may be the first HCPs women come into contact with after receiving initial information about breast cancer risk stratification, so may come seeking answers about completing the risk assessment:

… when the woman attends, it’s likely that the person that’s dealing with them later, is going to be, get all the questions, and they won’t have the answers (Radiographer 5 – site B)

The Clinical Nurse Specialists and GPs argued that telephone queries and personalised risk consultations will require considerable time and resources due to questions women will have about their health, family history, and care on receiving their risk estimate:

These ladies are coming for their screening mammogram, then being asked about their family history which they might not have thought about before, or even considered that they might be at risk, so that’s going to increase our workload (Clinical Nurse Specialist 1 – site B)

The Clinical Nurse Specialists across all sites felt that additional work would disproportionally fall to family history nurses, who have limited staffing and capacity.

Participants stated that family history risk and prevention clinics are currently overstretched, with some clinics reduced to one morning a month meaning capacity for additional risk consultations would be shared between those identified at increased risk via the NHS-BSP and those referred for risk consultation from General Practice. Nurses expressed concern as to how these additional women would be accommodated:

We have one [Family History Clinic] a month, we can have 10 patients and often we don’t even have a room to do that clinic in (Clinical Nurse Specialist 1 – site B)

In addition, women having completed risk assessment prior to attending a consultation was considered problematic as rectifying questionnaire errors would impact on the length and complexity of the consultation.

…when we actually go through it with them they say “oh yeah, there’s this other person. I know I didn’t put this on. And actually that wasn’t quite right”. So it might end up being a full blown consultation… (Clinical Nurse Specialist 4– site C)

Participants across all sites stated that sufficient funding would need to be made available to support risk stratification. Both radiology and nurse participants acknowledged that identifying and hiring skilled personnel to fulfil instrumental roles to deliver an effective service is already challenging without the added pressure of risk stratified screening.

…how is [Minister for Health] gonna get the money together, then, to fund all this? Because it’s difficult, there’s a difficulty recruiting the clinical team, that’s the radiologist, the doctors, the radiographers, all that, very, very difficult (Radiographer 5 – site B).

…you can throw money at something but it doesn’t make a difference. You need people with the appropriate skills to be doing the job (Consultant Radiologist 5– site C)

Participants questioned whether a risk adapted screening programme could be run effectively and, if not, what sort of impact an insufficient service would have on women’s wellbeing:

…the last thing you want then is to identify a woman and you’re struggling with the resources for the next step…And then the woman’s having to wait, and that will increase her anxiety (Radiographer 5 – site B).

Strong views were expressed regarding the presentation and method of receiving risk. Concerns centred on dissemination of risk, not that risk should not be conveyed.

Current intentions are to communicate risk via letter. The clarity of those letters was a significant consideration for the Radiologists and Clinical Nurse Specialists. It was suggested that contextual information, drawing women’s attention to the implications of their risk, and facilitating their understanding of how they compare to others should be presented clearly and explicitly:

A very well worded letter that was in layman’s terms, that was giving a risk equivalent to other things…Where they could understand by reading it what the implications potentially would be (Consultant Radiologist 5 – site C)

It was also suggested that women should be given a visual representation of their risk to mitigate any confusion in interpreting percentages:

So you’ve got a hundred smiley faces, and then you’ve got two [sad faces]. And so I think sometimes, visually, it looks so much better, than saying, five to seven per cent, and you think, oh no, that’s me (GP2 – site B)

Furthermore, it was suggested that risk letters containing complex information may not be accessible for some individuals, such as those with low literacy skills. A suggestion was made to create a letter which clearly provides women with optional reading material:

…would it be possible to create a letter that, for example, states the basic principles of what we want to tell them and ask them on one page only and then for people who want to read more into it, a second part that is more detailed (Clinical Fellow 1– site A)

Impact of risk letters on well-being

Participants at site B expressed uncertainty as to whether communicating high-risk results through a letter is acceptable due to the likelihood of it causing anxiety and distress, ‘…if I got a letter to say I was at high-risk, I would be freaked, I would’ (Radiographer 6 – site B). Further to this, concerns were raised with regards the appropriateness of sending moderate and high-risk women their results by letter:

Despite concern, GPs stated that risk in other diseases is communicated via letter and the possibility of causing anxiety is inevitable in spite of how carefully results are disseminated:

…it does sound quite scary being told that your breast cancer risk is whatever. But we do that a lot for heart disease, and I think patients are used to it now (General Practitioner 2 – site B)

Participants unanimously agreed that high-risk women should receive a face-to-face consultation about their care options upon receiving risk results, ‘The high-risk ones, they’re going to come to a clinic, aren’t they? Because I think that’s appropriate’ (Consultant Radiologist 5 – site C). It was suggested that these women should receive an automatic appointment, ‘…if they are known to have a high-risk, they could automatically get an invitation to the family history clinic’ (Radiographer 1 – site A). The HCPs recommend that a telephone hotline should be accessible and this information should be made explicit in the letters in order for women to gain immediate answers whilst waiting for risk consultations:

I do think that they need a point of contact. Anybody who gets that result, they panic, they think “oh god what does it mean” and so they will need somebody to talk to (Advanced Nurse Practitioner 1 – site B)

However, some of the Clinical Nurse Specialists expressed a preference to encourage women to have telephone consultations due to limited capacity at family history risk and prevention clinics.

Pre-existing issues surround both uptake to screening and pathways/guidelines for care, which the addition of risk provision could accentuate.

Participants stated that disengagement in breast screening is a continual problem. They attributed this to women’s personal health anxieties, stress, and reservations about breast screening. Screening staff at all sites were concerned with the balance of meeting screening targets and suggested risk stratification could be an excuse used by women to further reinforce their decision not to attend screening:

To mitigate this, it was recommended that an option to speak to a HCP could help ease concerns and enable women to make informed choices about screening and risk; however, participants did not identify who would be best to deal with this:

…there are sometimes things which patients won’t get involved with because of initial anxiety, not because they don’t believe in it […] whereas, if they have the opportunity to discuss it, that will make it less intimidating to be part of (Consultant Radiologist 1 – site A)

Participants identified many barriers to breast screening engagement, with the most commonly cited being low socio-economic status, ethnicity, and learning difficulties. It was suggested that additional engagement required for risk stratification may deter these groups further:

I think the level of involvement that would be required from a patient to get on board with this at the outset, may potentially further disengage a certain cohort of vulnerable patients… we need to make sure we don’t alienate them or…make it easier to disengage’ (Consultant Radiologist 1 – site A)

Some participants suggested that women from the populations who disengaged from screening were likely to be most at risk of developing breast cancer and would benefit significantly from risk stratification, thus making accessibility imperative:

The women that don’t do the Predict thing [risk assessment], is it because they don’t understand? So are they actually, could they be the group that are more at risk, because of their lifestyle… (Radiographer 5 – site B)

Participants stated that current guidelines for the management of women who are identified at high-risk of breast cancer are vague and inconsistent, ‘And they still haven’t sorted out high-risk protocols properly, have they?’ (Breast Screening Office Manager 2 –site C). This has led to guidelines being subjectively interpreted to suit specific clinics:

we’ve chosen to interpret the guidelines if you are moderate or high-risk then you will have annual mammograms until the age of 59 because it was easier to do that. It’s just that it’s very woolly isn’t it (Clinical Nurse Specialist 1 – site B).

This incongruence between guidelines and the varying implementation at different screening sites was a concern. It was suggested that women identified as high-risk would receive different levels of care based on their location, which could have emotional, financial and capacity implications.

…you’ll worry some people who can afford to go and do that [have extra screening privately]. And other people just here’s the anxiety and no funding (Consultant Radiologist 1 – site A)

This highlights the need for clarity in the guidelines for classification, care and management of women, and to give specific instruction to breast screening units and family history risk and prevention clinics on how to care for women identified at increased risk.

I think we have very limited knowledge of who has Tamoxifen and Raloxifene, so we’re not going to be able to answer that question (GP 2 – site B).

It was considered that women who opt for chemoprevention could be met with uncertainty regarding accessing risk management, while family history risk and prevention clinics operate without specific guidelines as to who will provide chemoprevention.

Tue May 10 , 2022
This year’s commencement ceremony will mark the first in-person commencement since COVID-19 emerged in early 2020. We are honored to introduce this year’s speakers and we can’t wait to celebrate this year with the classes of 2020, 2021, and 2022! Amber Masoni Amber Masoni will be graduating with an M.S. […] 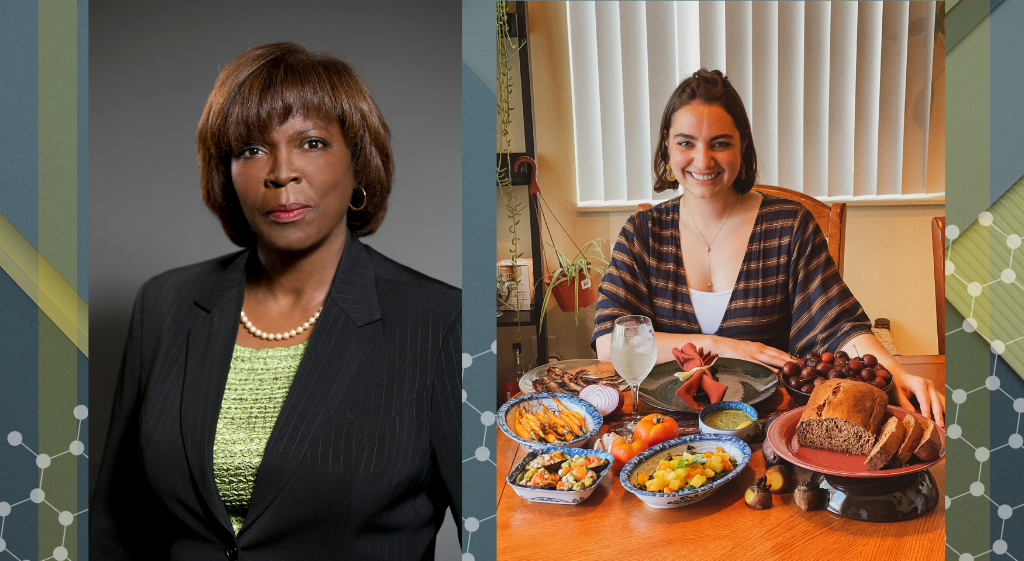