Ontario is falling short of Canada’s goal to reduce deaths of hepatitis B, a preventable infection, by 2030, a new study has found.

The hepatitis B virus affects the liver and is one of the most common causes of liver cancer worldwide, Ontario’s Ministry of Health says. It is spread through the blood or other body fluids from an infected person and the province sees more than 100 new cases reported each year.

The study, funded by Canadian Institutes for Health Research, has been published in the Journal of Hepatology.

Researchers at the University of Waterloo, University of Guelph and University Health Network in Toronto looked at hepatitis B data in the province from 2006 to 2018.

They plugged that data into a computer model that analyzed likely outcomes until 2030. That’s the year the World Health Organization (WHO) has a goal to decrease new cases of the virus by 95 per cent and to decrease hepatitis B virus-related deaths by 65 per cent — a goal Canada endorsed in 2018.

They found cases of acute hepatitis B, cirrhosis caused by the virus and hepatocellular carcinoma, the most common type of liver cancer, would decrease by 64.5 per cent, 9.4 per cent, and 10.5 percent between 2015–2030, respectively.

But they also found cases of chronic hepatitis B would increase by 26.6 per cent and liver-related deaths rise by one per cent in the same time period.

“Even with extensive integrated scale-up in vaccination, screening, and treatment, the morbidity and mortality targets may not be reachable,” the study said.

William W.L. Wong, a professor at the University of Waterloo’s School of Pharmacy and the study’s lead researcher, told CBC News that people can have the virus and not know it, meaning they can spread it to others.

“This disease may be silent and in fact, people may acquire the disease and they don’t know for a long, long time,” he said.

There’s also no curable treatment for the hepatitis B virus, Wong said.

The researchers say in the study there is a “need for a re-evaluation” in how Ontario and other countries around the world deal with the hepatitis B virus.

Wong there are two steps the province can take to address the problem.

One is to do more active screening of people moving to Ontario from countries where the hepatitis B virus is more prevalent.

“If we don’t screen people … then the [rate of] end-stage liver disease may actually rise and then we may fall behind the WHO target,” he said.

Wong also noted Ontario, like other provinces, doesn’t vaccinate against the hepatitis B virus until Grade 7, but the WHO recommends vaccinating children shortly after birth.

He said Ontario developed its vaccination schedule because the hepatitis B virus can be spread through sexual contact and giving the vaccine in Grade 7 was seen to offer better protection for young people who may become sexually active.

But he said younger children are at the highest risk of developing chronic hepatitis B, including liver damage and even liver failure, so vaccinating them sooner makes sense.

Vaccines got skipped during pandemic

The two years of the COVID-19 pandemic — numbers from which were not included in the study — will likely further complicate the issue, Wong said, because many students were learning at home at a time when they’d usually be in school and could access in-school vaccination clinics.

Region of Waterloo Public Health says vaccinating those young people fell to family doctors. Parents are notified by mail each June if their child had missed a routine vaccine.

Some “catch-up” clinics have been organized through public health, while in-school vaccination clinics are set to resume this October.

The health unit noted the vaccine is “highly effective.”

“When you get immunized, you help protect others as well. Two doses, at least six months apart, are needed for full protection,” Region of Waterloo Public Health said.

Ontario’s Ministry of Health did not provide comment after CBC News emailed questions about the study’s findings.

TK Pritchard, executive director of the SHORE Centre, a sexual health clinic and resource centre in Kitchener, says it’s not surprising Ontario is lagging behind in hepatitis B screening because there are often barriers to getting tested for sexually transmitted infections (STIs).

“Learning that hepatitis B is part of that issue is definitely not surprising overall. There’s a lot of work to do in the province to increase safe, supported and easy access to STI testing,” they said.

That’s a problem because the hepatitis B virus is very transmissible, Pritchard said.

“I think people often forget about hepatitis,” they said. “It’s definitely something that people want to be aware of and get tested.”

Low levels of testing may be hiding a COVID wave in Texas: Experts

Sun Jun 19 , 2022
Looking at data from the Centers for Disease Control and Prevention would give the impression that COVID-19 is generally under control in Texas. The federal agency’s map of levels of COVID-19 spread in the community shows most counties in the state are classified as “low” or “medium.” But public health […] 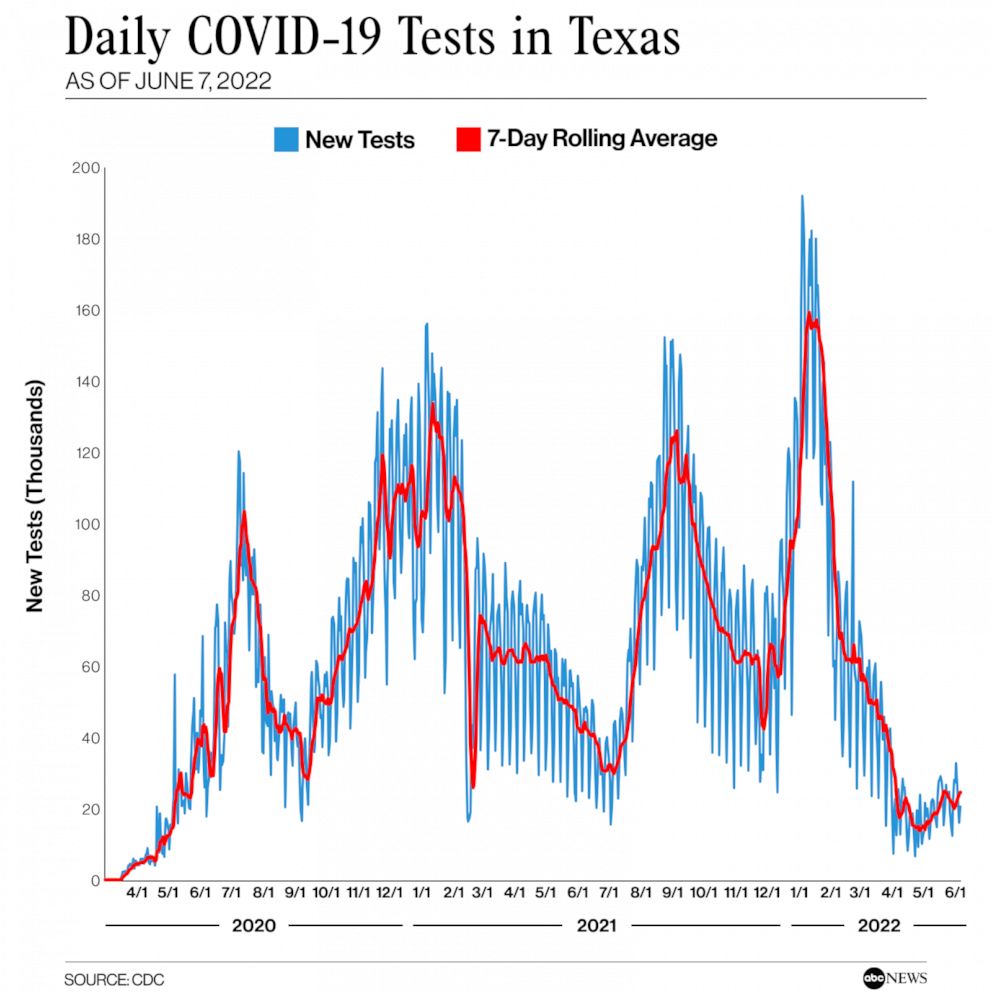