March 3, 2021 — A handful of tragic cases involving children who died during dental appointments have prompted a closer look at pediatric dentists’ growing use of anesthesia for kids having routine procedures like cavity fillings, root canals, and tooth extractions.

In Minnesota, a Twin Cities dentist paid a $2 million settlement to the family of a teen who died while having her wisdom teeth removed after he allegedly failed to properly monitor her after administering anesthesia.

In California, the death of a 4-year-old Oakland boy while under sedation during an oral procedure prompted the state’s dental association to draft sweeping new guidelines for dentists using anesthesia with children.

And in Hawaii, an Oahu dentist was charged with manslaughter after a 3-year-old girl had a heart attack during a root canal after being put under. The dentist was later acquitted, but the case prompted lawmakers to pass “Finley’s Law,” named after the patient, with new anesthesia guidelines for pediatric dental care.

Although cases like these are rare, the American Academy of Pediatric Dentistry (AAPD) recently issued new national guidelines for dentists who use general anesthesia to sedate young patients for procedures.

The guidelines, issued jointly by the AAPD and the American Academy of Pediatrics (AAP), call for certified anesthesiologists and trained emergency response specialists to be present in dentists’ offices whenever children are put under sedation.

In addition to the new national guidelines, state dental boards also have specific guidelines, says Kevin J. Donly, DDS, a professor and chair of the Department of Developmental Dentistry at the University of Texas Health San Antonio and a former officer for the AAPD.

“The guidelines go right down to safety equipment that must be available and all types of things for procedures — preoperative, things to do during the operation, and post-operative procedures,” he says

But some patient advocates argue more needs to be done to track and evaluate the risks. They note that no national regulations govern the use of anesthesia in children having dental procedures, and general guidelines vary state to state.

“It never has gotten sufficient attention,” says Debbie Hagan, who advocates for families of children who have been harmed in dental offices. “The only time you hear about it in the news is usually after there has been a devastating outcome; even then, it will be a local news report, with a reference to maybe one other incident.”

How Safe Is Anesthesia for Kids?

Tooth decay — dental caries — is the most common childhood infectious disease, affecting 621 million children worldwide whose cavities are untreated. Without treatment, cavities can cause pain and infections that may lead to problems with eating, speaking, playing, and learning, according to the CDC.

In the process of treating cavities, dentists often give children moderate sedation or general anesthesia. Common medications include benzodiazepines, opioids, local anesthetics, and nitrous oxide — all of which can cause adverse side effects, such as allergic reactions, hypoxemia (low blood oxygen levels), respiratory depression, a blocked airway, and even death.

An estimated 100,000 to 250,000 pediatric dental sedations are done annually in the U.S., according to a paper published in the journal Pediatrics in November 2017.

That wide range reflects uncertainty about how widely pediatric anesthesia is used. It’s also not known how many children die after receiving general anesthesia in the dental chair because dentists are not required to report such cases.

“There is no mandated reporting of adverse events or deaths, so we don’t know how often these occur,” wrote the authors of the 2017 Pediatrics article, “Ethics Rounds: Death After Pediatric Dental Anesthesia: An Avoidable Tragedy?”

A 2013 study published in the journal Pediatric Anesthesia identified 44 deaths associated with dental anesthesia in patients under 21 between 1980 and 2011. But the study was based only on media reports because “systematic data collection on outcomes of pediatric dentistry was lacking … despite an increase in the number of pediatric dental sedations administered over the past two decades.”

Rita Agarwal, MD, a practicing pediatric anesthesiologist and professor of anesthesiology at Stanford University, says that lack of information makes it difficult to truly assess risks.

“This is one of the big problems,” says Agarwal, former chair on the American Academy of Pediatrics Section on Anesthesiology and Pain Medicine, who helped write the new AAPD guidelines for pediatric dentists. “There are no real reporting requirements, and each state is governed by their own dental boards, and [they] are different. The majority of information that we have is from media reports. There are few studies, and getting information from the dental boards is difficult.”

She sees the need for new federal requirements for dentists to report deaths and adverse events, which would help improve safety guidelines.

“There is a lot we do not know about what does and does not happen with office sedation [and general anesthesia] for dental work in children,” Agarwal says. “What we really need is a non-voluntary database that is fast, easy, accurate, and captures every sedation/anesthesia event.”

Another concern: Parents may not understand the kind of anesthesia that a particular procedure will involve.

“Many patients are booked as ‘conscious sedation’ or just ‘sedation,’ without the understanding and appreciation that young children often need deep levels of sedation or general anesthesia to lie still and cooperate with what can be a very scary experience,” she explains.

The new AAPD guidelines “probably do not go quite far enough,” Agarwal says, but they “are a lot better than they were.”

Even so, deaths and complications are “very rare” in light of how many children receive general anesthesia, says dentist Donly of the University of Texas Health San Antonio.

“Thousands and thousands of general anesthesia procedures are done in children every year, and they come out well, he says. “Some are done in hospitals; some are done in dental offices or oral surgery offices. … And, so overall, it’s a safe procedure.”

In addition, deaths have often involved children who had conditions that may put them at risk for respiratory or cardiac failure.

That makes it critically important for dentists to know a patient’s medical history, Donly says. He often consults with a child’s pediatrician, cardiologist, or other specialist before he decides how to proceed with a patient who has a chronic condition.

“What if you have a kid who has severe heart defects, and you don’t want to put him under a lot of stress in an outpatient dental clinic?” he says.

“Then it might be best to have the work done under general anesthesia, even if they’re 10, 12 years old. Because we don’t want to put that child under any additional stress, because of that kid’s heart condition.”

Children with severe autism or certain other conditions are more likely to be sedated in the dental chair — even for routine preventive care, says James Tom, DDS, a dentist anesthesiologist.

It may also be a good option for children who require complicated dental work or are very young and won’t sit still in a dentist’s chair.

Tom says there are reasons why the new AAPD guidelines don’t clearly spell out when — and for which patients and procedures — general anesthesia is the best option.

“The need for general anesthesia is based on factors other than just the procedure itself — age, level of cooperation, development of the child, caretaker expectations, invasiveness of the procedure(s), etc.”

Questions for Parents to Ask

In light of the uncertainties, how should parents respond if a dentist recommends general anesthesia for a child?

First of all, parents should verify that a certified anesthesiologist and a second trained emergency response medical specialist — such as a nurse — will be present, along with the dentist and any other assisting staff, as the AAP guidelines recommend.

“I think the most important thing is for parents to really be aware of the difference in the personnel and to ask who will provide the sedation, who will help if something goes wrong,” says pediatric anesthesiologist and guideline writer Agarwal.

“If they are not happy, they can talk to their pediatrician about alternative options. There are many hospitals, surgical centers, clinics, and physicians that will provide anesthesia and sedation with a board-certified anesthesiologist or other qualified personnel.”

Donly says preventive medicine is the best way to head off the need for procedures that require sedation, with the AAPD recommending a child’s first dental appointment no later than their first birthday.

“The latest data I saw was that the most unmet health care need during this COVID-19 era has been dentistry,” he says. “So, parents need to get their kids in on a prevention basis — whether it’s a general dentist or a pediatric dentist — really early in life to prevent caries, so we really don’t have to face these issues.”

Weight loss: Women shed 5st without ‘restricting' what she ate - 'No miserable diet!'

Wed Apr 20 , 2022
Finding the inspiration or motivation to lose weight can take time. Laura, 30, a lead worker for child and family services from Llanelli in South Wales, has had an incredible lifestyle transformation to lose over five stone in just a year. After noticing she was putting on more and more […] 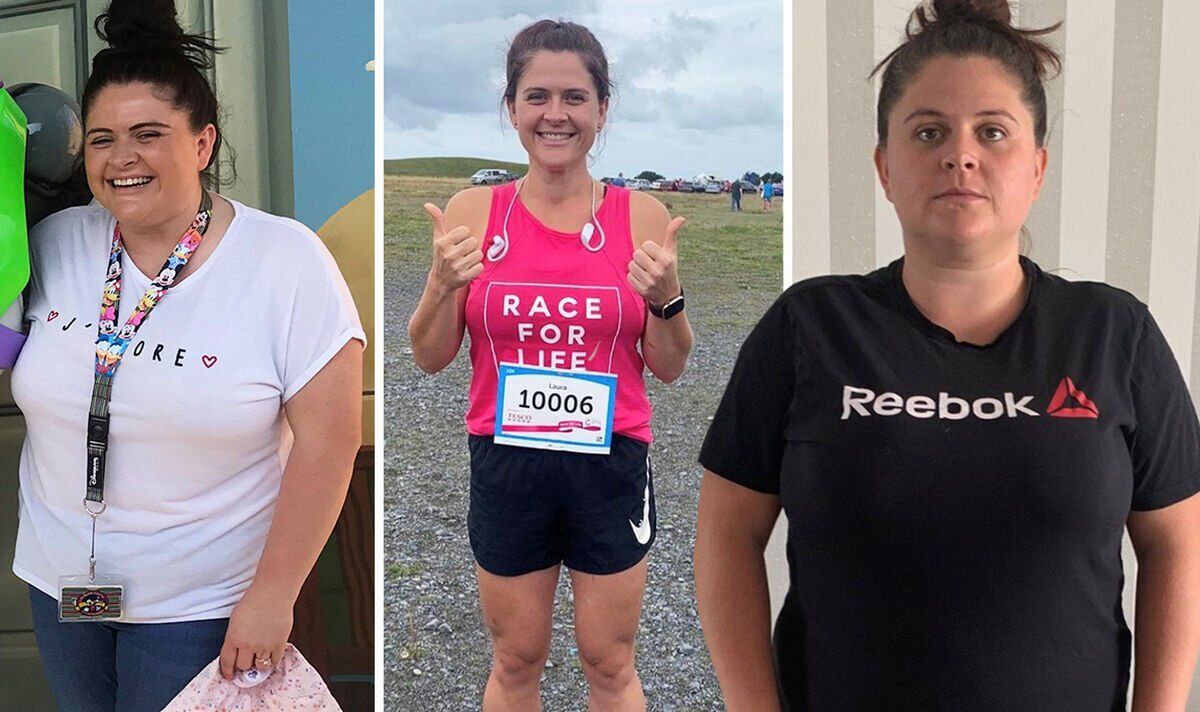