“What’s the secret to fitness?”

I’ve written about fitness and wellbeing, and worked as a fitness instructor, for the better part of a decade – so I’ve been asked variations of this question a lot over the years. And although it seems simple, there are a lot of ways to answer it.

So I put this age-old question to the experts: several members of the Apple Fitness+ team who I recently had the pleasure of meeting at the state-of-the-art Fitness+ studio in Santa Monica, California.

So, according to the Fitness+ team… what’s the secret to fitness? Unsurprisingly, there’s no mystical answer.

READ MORE: Grace Hyland says she ‘hates’ being politicised for being transgender

READ MORE: Why thousands of Aussie avocados are being left to rot around Australia

“The first thing I think of is consistency and community,” says Molly Fox, who teaches yoga and core classes on Fitness+ and – with more than four decades of experience – is the oldest member of the trainer team.

“Finding a place like Fitness+ that you can relate to, and feel a part of, is really important,” says the 67-year-old. “And then doing it consistently over time, and finding something that you love or don’t hate.”

“[Exercise] can’t be a punishment,” says Ngo (who, by the way, has an utterly charming London accent that does indeed add a sense of fun to her Fitness+ classes).

“If it’s a punishment, you’ll go a couple times and then you’ll go, ‘I’m done.’ [If it’s] something that makes you happy, you’ll just end up coming back to it again and again and find yourself being consistent.”

For a daily dose of 9Honey, subscribe to our newsletter here

Fitness+ also includes meditation sessions of varying lengths (from five minutes up to 20), and instructor Christian Howard‘s secret can be described as self-awareness.

“For meditation, it’s really knowing yourself, really understanding what you can bear in what moments,” he says. “So if it’s five minutes, if it’s three minutes, just making sure that you show up for it, fully.”

Howard, who also leads beginners’ meditation classes on Fitness+, adds that the biggest myth in meditation is that “your mind needs to be empty”.

“Your mind, it’s going to do what it’s going to do… it’s full of thoughts,” he says, adding that understanding this is “key” to meditation. “Recognise that it’s just going to keep going. It’s a beautiful thing.”

When I ask the rest of the trainer team for their biggest fitness myths, Ngo shares that she wishes “people would stop thinking that they have to have everything together”.

She explains that you don’t have to figure out your diet, your routine, or the right people to help you before you start trying to get fit – you just need to start.

“That would be one thing I’d encourage more people to do – just start,” she says. To note, her HIIT classes on Fitness+ are as short as 10 minutes. “It doesn’t have to be perfect.”

The myth Fox wants to dispel is the misconception that once you reach whatever fitness goal you set out to achieve, you’ll suddenly be happy and life will be perfect.

Instead of fixating only on a fitness end goal, she recommends enjoying the process of fitness.

“The process is where it’s at,” she enthuses. “Enjoy the day, jumping, the run… so that it doesn’t become a chore, [it] becomes just a part of what you do every day.”

Jay Blahnik, Apple’s Vice-President of Fitness Technologies (who’s also worked as a fitness instructor), says his fitness myth is the misconception that a workout only counts if it’s long and sweaty.

Fitness+ counters this impression by encouraging its users to “embrace whatever time [they] have” to exercise or meditate, in short, or longer classes.

“The fact that we put as much love into a 10-minute workout as we do a 45-minute workout is a testimony to this trainer team really believing if that’s all [the time] you got, it’s great,” says Blahnik.

The entire trainer team – not only meditation instructor Howard – is passionate about the positive effects of fitness and exercise on mental health.

“There’s so much emerging science coming out about mind-body interaction and how necessary it is for us to be able to understand both at the same time,” Howard says.

“The science says that community is one of the keys to longevity and a happy life,” she adds.

Ngo is heartened by the many, many stories of people who’ve started exercising to change how their body looks, but have continued exercising because of how it’s changed their mind.

“What’s amazing is some of the messages we receive from our users who started their journey because of those reasons, but then being like, ‘Oh, my gosh, I get some stress relief now, it’s helped my mental health so much’,” she says. 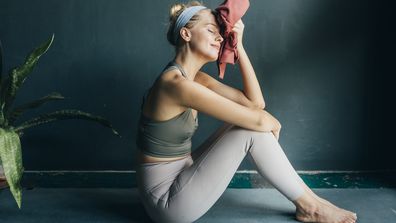 Fitness trends you should join in 2022

Thu May 19 , 2022
A weight loss expert has shared her top tips for losing belly fat that require just five small changes to your lifestyle. This Morning’s resident doctor, Sara Kayat, shared her advice after a recent study found that 63 per cent of people in the UK are overweight or obese. She […]